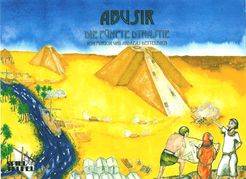 Abusir is by Marion and Andreas Dettelbach. It’s set between 2496 and 2433 BC. South of Cairo, tens of thousands of workers erected the royal necropolis of the Fifth Dynasty on the shores of the Nile. The pyramid construction for the Pharaohs Sahure], Nefirirkare, and Niuserre begin. The building material is the white limestone from the quarries in what is today Ma’asara. For pillars and doorways, rose granite from Aswan is sent by ship. The valley of the Pharaohs lies before the players – although no pyramids are built yet. But the seven planned building sites are already marked. The job is to transport the proper stones from wharves on the Nile and build the pyramids with them. And in the process push the competition out of the way.