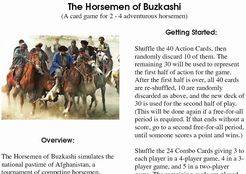 The Horsemen of Buzkashi is a card game for 2-4 adventurous horsemen which simulates the national pastime of Afghanistan. Teams of horsemen try to gain control of the Boz, traditionally a decapitated sheep or goat, and carry the Boz around a flagpole set away from the center of activity, and then bring the Boz back to a set circle or goal area on the field called the Hallal. A successfully deposited Boz within the Hallal scores a point for that team. Objective: Score the most points by dropping the Boz into the Hallal after two halves of play. If at the end of the second half, there is a tie for most points, then a freeforall period is played with everyone (even those who did not have the most points), with the first player to score declared the winner of the game. Otherwise, the team with the most points at the end of the game wins! Components: 40 action cards; 24 combo cards; 120 rider cards (5 chapandaz and 25 pakir for each of the four teams - Turkmen, Mongol, Tajik and Nuristani horsemen); one six-sided die; a Boz marker; and a Flagpole marker. Each rider has individual statistics for strength, speed, tactics, and boz skill. Further, each team is designed to have a different flavor; the Turkmen tend to be the fastest riders, the Mongols the strongest, the Nuristani the best tacticians, and the Tajik are pretty well-rounded. This game was an entry in the 2005 Buzkashi Game Design Contest held here on BoardGameGeek.