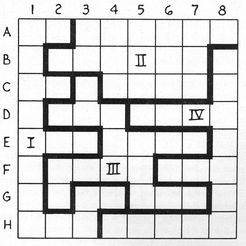 Lap was published in Sid Sackson's A Gamut of Games and was described by him as a second or third cousin to the well-known pencil and paper game Battleship. Each player secretly draws dividing lines on a grid of 8x8 cells, creating four sectors of exactly 16 squares. Players then take turns gathering clues by asking how many cells in a particular 2x2 square belong to each sector. The game is won by correctly deducing the opponent's setup.