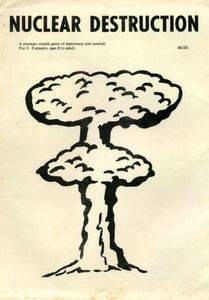 A number of major (player) countries and minor (non-player) countries fight it out to the death. In order to win, a player must destroy all opposing populations while retaining at least 1 million in population. Originally designed as a play-by-mail game, this version came packed with turn build sheets, missile and factory counters, and money. Also sold at some point as Negotiate or Die!