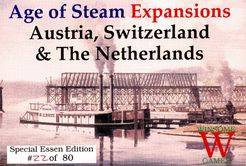 This Age of Steam Expansion brings the game to Austria, Switzerland &amp; The Netherlands. Each map includes several new rules. The Austrian map is for 2 players and includes a special 5 spoke Dedicated Town hex tile. The Swiss map is for 3 or 4 players. Bond buybacks are permitted. The Dutch map is for 5-7 players and includes a special Goods Demand and Action Display. This expansion was released in a numbered Essen Set by Winsome Games at Essen 2005. The Netherlands expansion was reprinted in the April 2007 edition of Spielbox magazine. The Switzerland expansion was made free by John Bohrer. The Austrian expansion was reprinted in 2007 by the Steam Brothers in Age of Steam Expansion: Austria &amp; India.