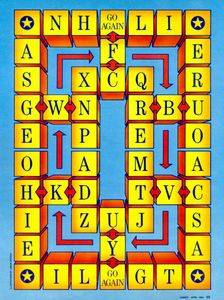 "A Two-Player Board Game in Which Stealing is Stylish" The gameboard is printed in the magazine. There are two 'tracks', an outer and an inner track, and 6 spaces where you can move from one track to the other. Spaces have either a letter, a Star (scoring space) or 'Go Again' on them. Movement on the board is clockwise. Other equipment needed: two tokens of one color, two tokens of another color, two D6 and paper and pencil for each player. Each player gets 2 tokens of the same color (which they control) and paper and pencil. Designate an area on your sheet for your list of available letters, or 'Letter List.' Players alternate turns. On your turn, roll the dice. Move one of your tokens the number of spaces shown on one die and the other token the number on the other die. -- If you land on a letter, write that letter down on your sheet, adding it to your Letter List. If both tokens land on the same space, write down the letter twice. -- If you land on your opponent, steal a letter from their Letter List (it is crossed off on their Letter List and written on yours). --If you land on a 'go again' space, take another turn after finishing your current one. -- If you land on a star, you can form a word and score it. Form a word from the letters on your Letter List. Write the word on your sheet and cross off from your Letter List the letters you used to form your word. Words must have a minimum of 5 letters. Score 10 points for a 5-letter word, 30 pts for a 6-letter word, 60 pts for a 7-letter word, 100 pts for an 8-letter word, 150 for a 9-letter word, and 200 pts for a word of 10 or more letters. Score a bonus of 5 points for each letter currently on you opponent's Letter List. Play to 500 points (or any agreed upon total).