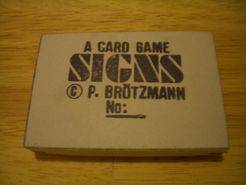 A card game designed by German Free Jazz musician and graphic artist Peter Brotzmann. Set contains rules and 23 cards with original abstract images by the artist. Can be played as a card game, but when this was originally released at a gallery performance hands of cards were dealt out to the musicians in Brotzmann's Chicago Tentet to perform music based on what they saw on the cards. First released in a signed and numbered edition of 200, there is a subsequent non-limited release. Cards can be combined with Peter Brotzmann's other card game called "Images". Integrates with: Images