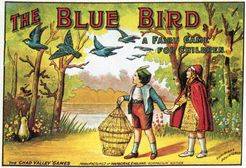 A roll-and-move children's game where the players travel over the ten spaces of the board collecting Blue Birds. The winner is the player with the most Blue Birds at the end of the game. The game portrays scenes inspired by Maurice Maeterlinck's L'oiseau Bleu. The game uses a four-sided totem marked 3, 2, 1 to regulate movement and with a Blue Bird on the fourth side. A player receives a Blue Bird when they spin that figure on the totem, or for landing on certain spaces.