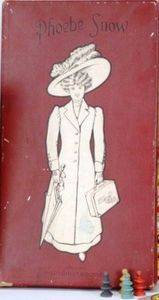 A roll-and-move race game involving a train trip from New York to San Francisco. Pre-dates World War I. The spaces are marked with various symbols representing penalties and bonuses. Phoebe Snow was an advertising figure for the Lackawanna Railroad running from New York to Buffalo. The rail line advertised cleaner burning coal which helped Miss Snow's white dress stay white. There was a re-issue done of this game in 2011. It is clearly marked as a reproduction.