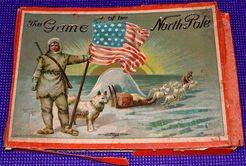 A roll-and-move race game portraying the hazards faced by Arctic explorers. The game was first published in 1909 by McLoughlin Bros. and again in 1910 by J.W. Spear. The rules of the two versions were slightly different. In the McLoughlin version, up to four may play. An "indicator" (spinner?) is used to generate numbers from one to six for movement purposes. The goal is to be the first player to move to the North Pole spot and back to start. Jumping over the piece of another player causes the jumped piece to be moved three spaces backward on the route home (and three more if that spot is occupied). --user summary The North Pole Game is to the child what a cinematography lecture by [polar explorer] Sir Ernest Shackleton is to a grown-up. During the game all incidents of a voyage of Polar exploration are met, e.g. sturdily built whaler caught in the ice pack, landing party building snow hut, engaging Eskimos for the journey, shooting Walrus and Seal, admiring the Aurora Borealis as it stretches athwart the sky. Here they are making a sledge dash for the pole, and at last planting the flag upon the untrod solitudes that surround the Axis of the Earth. --publisher description