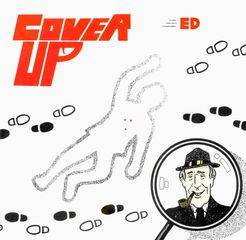 Covered Up comprises two games, a basic game and an advanced game. In the basic game a murder has been committed. Two players (or teams of two) play either black or white footsteps. The twelve playing cards are shuffled and dealt face down to both players. Players alternatively play a card (which contains some holes) onto the board. The object is to cover up as many of your own footsteps as possible whilst exposing your opponent’s. In the advanced game (3 to 4 players) each player chooses a role card to establish whether they are a detective or a murderer. Before the start the 2 murderers must each decide on a board location to hide their victim. They tell each other their location, one will be a white location and one a black location. The detective(s), who are not told of the locations, will use the diagrams on the back of their cards to assist them identify the location of the bodies. Each murderer alternatively places a playing card onto the board, but they must not alter the color or direction of the two hidden locations. Each murderer will try to expose the other by changing as many of the opponent’s steps as possible to help the detective with their eliminations. When a detective has one location left un-eliminated he has caught the murderer. If the caught murderer has played one less card than their opponent then the opponent can play one more card to try to salvage a draw. The victorious detective and the uncaught murderer are the winners.