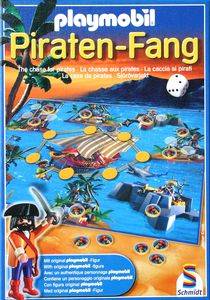 Piraten-Fang (or The Chase for Pirates), is a children's dice game arising through a collaboration between Playmobil and Schmidt Spiele. The Pirate Captain is planning a new series of robberies and is looking for a new crew by searching from island to island. Players start the game with an equal number of pirate counters. On his turn a player rolls the dice and moves the playing Pirate Captain piece 1, 2 or 3 spaces round the board in accordance with the dice roll. If the Captain stops in front of an island on which there is at least one occupied space, the player places one of his pirates on one of the free squares. If he loses a pirate, the player may then decide to roll again, or if he prefers, to stop. If the Captain stops in front of an island on which there is no unoccupied space then the player takes all the pirates off that island and adds them to his "crew". His turn then ends. The game is over when a player loses his last pirate. The player with the most pirates in his crew wins the game.