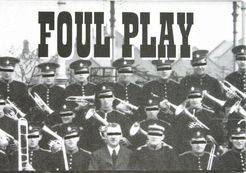 FOUL PLAY - The Cunning Brass Band Card Game Each card depicts either the conductor or player within a brass band, with each card having a scoring value of between 1 and 7 Starting with a hand of 7 cards players try to build a band by drawing form a deck, the discard pile or requesting cards from the player immediately on their left - and then discarding. Obtaining cards from another player involves requesting cards by the colour of the jacket the player wears, though the player is not obliged to declare any musicians of that type should he choose not to do so. The object of the game is to get a full band - that is one card for each section in the band: cornets / horns / trombones / euphoniums / basses / percussion / conductor. When a player is confident that he has a winning hand then he can "declare" by placing his hand face down on the table. Play continues among the other players until a second player declares. At this point the players with complete bands then score their hands with the highest total winning. In the event of a tie the winner is the player with the highest number of cards with players in the same colour jacket.