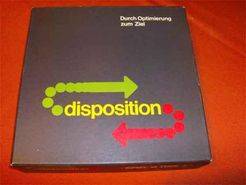 The board contains 2 circular tracks, 20 spaces long, and with a coloured dot that separates each two neighboring spaces. In the center is space for 3 plastic containers with a slot in the lid. Each player gets 2 pawns, 5 fuel chips in each of the 4 colours, and 3 sticks. Each player places their pawns on the board, one on each track, next to a dot of their colour. The aim of the game is to be the first player to return both pieces to their starting positions, moving one pawn round clockwise, and the other anti-clockwise. It is a diceless game: players are in control of their own movement. Any unoccupied space can be reached as long as, and here’s the twist, the player has enough “fuel” to reach that square. Remember those chips? For each square traveled, one chip has to be handed in. The landing space determines which colour those chips should be. Used chips are then put through the slots of the containers in the middle, spread between them at will. At the start of the game, each player only has enough chips to get one pawn round the board. To get both pieces round additional fuel need to be bought. During your turn, you can buy the hidden contents of one of the containers by discarding one of your three sticks. If you have run out of sticks and you haven’t got the right chips left to get home than you are out of the game. It’s a lightweight but rather clever racing game for the entire family, but its diceless movement system sets it apart from most racing games aimed at this market. Disposition was licensed from B.L.A. and published by Berliner Spielkarten in their "Spiel-O-Thek" range.