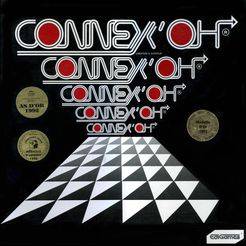 Another case where a black and white design meets a 2 player abstract game. 2 players face each other across a large plastic board that contains 6x6 square plastic tiles. All tiles are divided into a black and white triangular half, with a landing space on each side for the playing piece of that colour. Tiles have a handle stuck in the middle that enables them to be lifted up, twisted round and replaced without the risk of having pieces slip off. Both the black and white player have 6 stones in their respective colours that start on opposite sides of the board. All tiles initially face the same direction, so that no two touching sides have the same colour and hence no "connections" exist on the board at the start of play. By twisting tiles, players can create "connections" of identically coloured halves, creating a corridor along which pieces of that colour can progress. Each turn players either twist one tile in the aim to improve the available route, or move a stone along one of those routes. Players try to remove all stones in their colour from the other side of the board. The first to do so is the winner. A tile that has just been lifted gets a red marker on it. It prevents that tile from being turned by the player who is next. Additionally, it also prevents 1 or 2 neighbouring tiles from being turned, as long as a connection in that player's colour was created to the neighbouring tile(s) by the newly placed one. An elegant rule that prevents stalemates and adds another tactic to employ. Sébastien Sjoholm copyrighted this game in 1989, but it wasn't until 1992 before it appeared with EdiGames, that since has published more of his designs. Connex'Oh won several awards ("As d'Or", Cannes Festival International des Jeux 1992; "Médaille d'Argent", Concours Lépine, Paris, 1992; "Médaille d'Or", Salon international des Inventions de Geneve, Geneve, 1993) and has been re-issued in 1995 as Connexo, again with EdiGames, but this time the board was only 4x4.