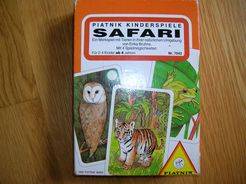 "Who lives where?" - That's the question. The Camel in the desert of course, but where does the lion live, the... There are two different series of Safari cards. The first series is made up of 24 animals with a white background while the other series has the same 24 animals in their living places. The player who has the most pairs at the end of the game, wins the game. NOTE: Piatnik produced 2 different games titled Safari.