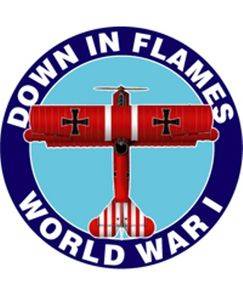 Down In Flames - WWI depicts the fun and flavor of World War I aerial dogfighting. You get to fly the colorful and agile aircraft of WWI as you make history in the world’s first use of aircraft in a military role. This Down in Flames game opens up the whole new era of WWI combat. For those of you who have played the WWII version of the game series you will find that you catch on to the game, and its new systems very easily. For people who are new to the game, welcome aboard! Components include: 81 Action Cards 15 Western Aircraft types (each with 1 Leader card and 2 Wingmen cards) 15 Central Aircraft types (each with 1 Leader card and 2 Wingmen cards) 171 total cards Rulebook Counters for Hits, Turn Order, Altitude The game is published in both PDF and Vassel versions. A "Print On Demand" option will also be available.