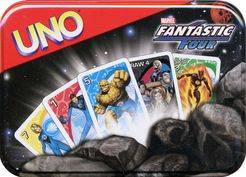 Standard Uno using a Fantastic Four theme. WHAT MAKES IT DIFFERENT FROM TRADITIONAL UNO: The "N-Zone" card. When played the player who plays it selects another player to draw cards from the draw pile until a red card is drawn. When the selected players draws a red card, he/she must place it on the discard pile. The player who played the N-Zone card determines the color to be played in the next round by announcing his/her choice of red, yellow, green or blue, despite that there will be red card on the top of the discard pile. The N-Zone card can be played as a player's last card allowing him/her to go out of the game. If this happens, the player who plays the card still chooses a player to draw cards. The point value of the N-Zone card is 50 points.