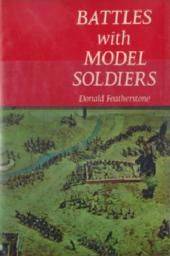 Part one deals with the general principles of wargaming with miniature figures while the second part looks at wargaming particular periods from ancient to modern. Some of Featherstone's comments illustrate that the complexity vs. realism debate was not restricted to the board wargaming hobby: "If it is to be acknowledged that the game is the thing, to be played for enjoyment and relaxation and not as a form of military exercise or training, then the campaigner with model soldiers will be well advised to confine himself to a simple set of rules with a reasonable resemblance to the period in which he is fighting. However, if he has the sort of mind that likes to explore far afield and look in to all corners, he will probably, at some time or another in his wargaming career, find himself embroiled in obtuse calculations that seemingly do little to enhance enjoyment of the game. Certainly the author, in more than fifteen years of wargaming, has never consciously considered other than the simplest aspects of movement and the ground-scale, yet has consistently enjoyed in every period of military history campaigns which have provided realistic resemblance to the tactics and manner of fighting of those periods." 215 pages, illustrated.