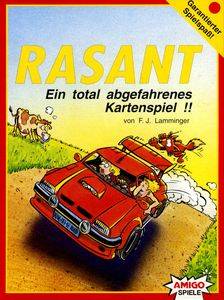 Players play cards in colors matching 12 wooden cars (3 cars in each color) which are placed in a line behind a single black pace car. Players must play a card in the same color as the first card played. The player playing the highest card in that color after all other players have passed then moves the car of that color farthest back in the line, along with all cars behind it, in reverse order to the front of the line, scoring 1 point for each car moved. If the pace car is among those moved, it does not score but rather doubles the points for all other cars that move up.