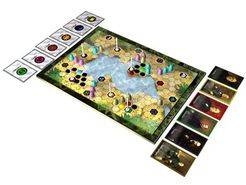 In the 19th century, excavation sites in Kathmandu uncover spectacular testimonials of earlier civilizations. With your team of archaeologists, you take part in the adventure. This game is a simplified and redesigned version of the earlier game release Pandémonium. The rules are exactly the same. Katmandou won an award at the "Concours International Des Créateurs de Jeux de Société" in 2004. See "Web Links" section below for location of archived files allowing PnP in French.