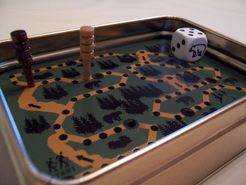 Be the first to move your hiker back to his tent, avoiding the bear dens along the way. This is a basic roll-and-move, follow-the-trail game, which includes shortcut spaces for those fortunate to land on them, and also the Bear Den spaces, which forces the unlucky hiker to re-roll the die and move back the indicated number of spaces. The six-sided die has a bear where the "1" would go, and would normally be treated as a 1. The "bear" prevents players from using the shortcuts, and if it comes up on a player's penalty roll (after landing in a Bear Den), that player must move back to Start. This game, along with others in Channel Craft's Vintage Game Series, comes in a small tin. Movement is made with pegs, which rest in a hole after each move, making it a suitable choice for travel.