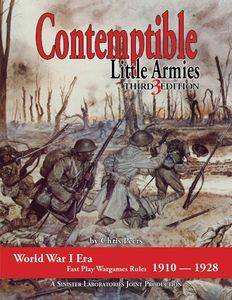 Chris Peers' popular early 20th Century battle rules, suitable for WW1 and other conflicts from 1911 through the 1930's. Tanks, armored cars, artillery and aircraft are all covered. The third edition of the rulebook has been reorganized with a Table of Contents and color photos added. Some changes have been made to the rules as well, specifically, the Direct Fire resolution rules have been changed to take into account a defender’s tactical rating and models hit by Direct fire do not roll for casualty status until the phase just prior to Morale. This will provide a slight bit of uncertainty as to the status of a unit until the morale phase. And, to top it off, a quick reference chart of oft-used tables has been added to the back of the book. This should help speed up play.