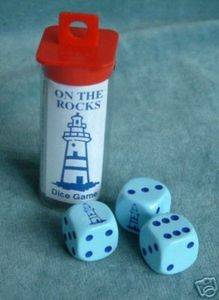 The special dice included in this set have an image of a lighthouse on each die instead of the number one. As each player rolls, accumulating points on their way to 100, the lighthouses signal danger! Roll one lighthouse and you lose all points from your current turn, roll two lighthouses and you lose all your points from the entire game, but roll three lighthouses and you are shipwrecked and out of the game for good. The game uses three six sided dice each of which has a lighthouse symbol instead of the conventional one spot. It can be played by 2 or more (or solo).