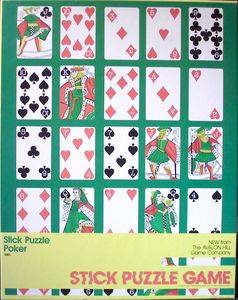 "Stick Puzzles" were a short-lived experiment similar to jigsaw puzzles but composed of two-sided, rectangular cardboard sticks rather than the traditional interlocking pieces. Most of these were simply pictures to assemble, but one was also a game. Stick Puzzle Poker, in addition to being a puzzle where each side shows a different set of ten poker hands, also includes rules for traditional poker and multiple variants including several that make use of the puzzle as part of the game. Although the actual use of the puzzle in the game is minimal (simply defining which parts of the deck should be pulled and used as community cards), the set does allow for a variety of different ways to play: "Hole in the Head," "Low Blow," "High-Low Split Stikeroo," "Twin Sticks," "Flip Stick Rollover," "Stickeroo," "Stackpoli High-Low," "Super High-Low," "Bean-Go Draw," "Stick-O-Dynamite" and "Acupuncture Stud."