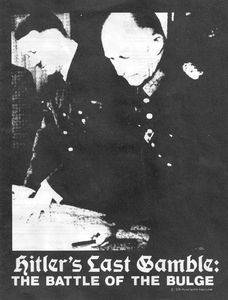 想玩 拥有
Hitler's Last Gamble: The Battle of the Bulge

Rand Games Associates' entry for Battle of the Bulge, unique for the use of German identification symbols on the German counters. This title was one of the two release in their second year of subscription games (along with Brandy Station) before they went out of business. Collectively titled Command Series, Vol 1. included nine games in a single red storage box, and Command Series, Vol 2. was projected to have 6 titles). The game is the traditional hex based CRT combat system wargame with a smallish map of the Ardennes. The scale is regimental/brigade level with 2 turns per day of battle.