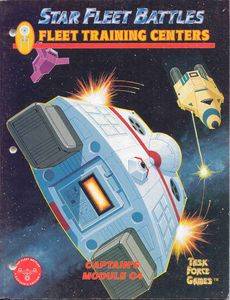 Part of the Star Fleet Battles Captain's Edition line. From the back of the cover This product adds new rules, races and ships for Star Fleet Battles: - The Frax: Based on "wet navy" warships with FX and RX firing arcs. Their subs use the gravitic Axion Torpedo. - The Britanians: Their cruiser mounts no less than eight disruptors - four on each side! Cross the T to victory. - The Sharkhunters: A cloaked ship's nightmare, they use flashbombs for lock-on and wire-guided plasmas for the kill! - The Qaris: Their ships mount rapid-fire kinetic cannons in rotating turrets. Their gigantic Scud missiles kill bases. - The Flivvers: Float like a butterfly - and kick like a mule! Speed-640 Huperdrones cannot be stopped easily. - The Barbarians: Their ships have option mounts able to hold weapons and other systems to simulate any enemy. - The Triaxians: Their ships move in three direcions (rather than two) and mount the versatile Type-A Plasma Torpedo. - The Deltans: Designed for ONE mission - base busting! They are the fastest ships able to hold overloaded photons. - The Canadi'ens: Their Maple Leaf Maulers will hit you coming and going, right and left, up and down, in and out.