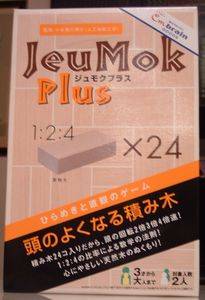 The game consists of 24 solid pieces of wood 1x2x4 and a cloth bag that can contain them and has two different board printed on the two sides. A particular dice and another couple of cloth pieces are included. The rules describe five different games, all for two players. The first and most important (being quoted on the box) is a version of domineering with the variation that all the pieces must be placed adjacent to pieces previously played. The second is a similar abstract strategy game with two separated starting "camps". The objective is to be the first to touch your opponent group of connected pieces. The third game is also similar to domineering, but played on the board with smaller squares and using the dice. The dice dictates the spatial orientation in which the pieces must be played and the first unable to comply loses. The fourth game is a sort of "Nim", while the last is a sort of "Jenga".