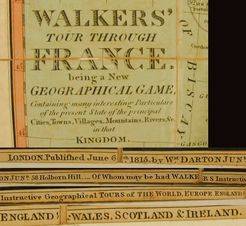 Full title: "Walker's Tour through France Being a New Geographical Game Containing Many Interesting Particulars of the Present State of the Principle Cities, Towns, Villages, Mountains, Rivers, &amp;c., in that Kingdom.". Early 19th century board game comes in slip case box which measures approx. 5 1/2" x 7" and contains an 84 page booklet titled "A Key to Walker's Geographical Tour Through France with Directions for Making the Tour" and a folding, hand colored Game Board being a map of France with a trail of 199 game "spots" tracing a tour through the entire country beginning at spot #1 (Calais) and ending at spot #199 (Paris). The map is linen backed and folds out to approx. 21 1/2" x 20 1/2". The map is marked "London. Published June 6th, 1815 by Wm Darton Junr. 58 Holborn Hill ___ Of Whom may be had Walker's Instructive Geographical Tours of the World, Europe, England &amp; Wales, Scotland &amp; Ireland.". Among the very earliest commercially manufactured Board Games produced.