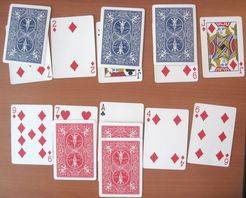 This game has been described as "glorified War," but that description is almost entirely misleading. Advanced Tactics uses one standard deck of cards for each player. The players battle over pairs of cards face up on the table, and draw three cards that are used to augment the strength of one or more of the pairs of cards in play. Clubs count as negative points, and diamonds require another card to be drawn for that column. The object of the game is not to simply win more cards, but to win "point cards". Point cards start with the Aces, then move to Kings when all of the Aces are claimed, and so on. Play is continued until all points are claimed through a pre-agreed goal (for example, if playing to Queens, then the game will end when all Aces, Kings, and Queens are claimed). The player with the most point cards wins. This makes for interesting longer-term strategy as well as the obvious short-term strategy of winning the current cards on the table. Complete rules for this game are in the July 2007 issue of Knucklebones magazine. Several rules variants are also included.