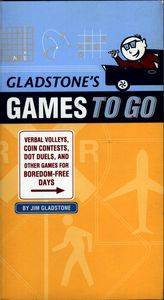 Gladstone's Games to Go describes over 45 games, none requiring any special equipment beyond paper, pencils, and coins. The book is divided into the following sections: I. VERBAL GAMES (no equipment needed) II. COIN GAMES III. PEN-AND-PAPER GAMES A. General (Tic-Tac-Toe variants and Nim) B. "Dots and Doodles" C. "Hidden Secrets" D. Word Games Most of the games can be played by two players; some can be played with a large group, and others can even be played solitaire. Some of the games, like Ghost and Nim, are well-known: others, like Moka and Tri-Dots, may be less familiar.