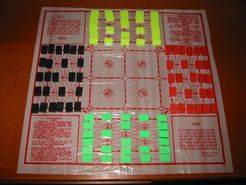 Si Guo Da Zhan or The Great Battle of Four Countries is a four-player version of Jun Qi (Army Chess) (otherwise known as Lu Zhan Jun Qi or Land Battle Chess). This stratego-like game is played in partnership, 2 players against the other pair. Like Army Chess, the objective is to capture the opposing army’s flags with one’s soldiers. Each player’s army is composed of the same pieces as in Army Chess. Capturing is of a lower ranked piece by a higher ranked one. There are grenades (exploding and destroying everything) and land mines (exploding and destroying everything, but itself destroyed by engineer soldiers). Pieces in camps may not be captured. Pieces on railway tracks move further than the usual one step; engineer soldiers may move as far as they wish on railway tracks. Hidden Movement / Fog Of War (limited intelligence) Rules A fifth person acts as a referee who judges outcomes of battles and so limits the information to the other players. Without a referee the two players involved in each taking move reveal their piece to the other (Normally the attacker reveals his piece and the defender says whether it is a win, lose or draw.