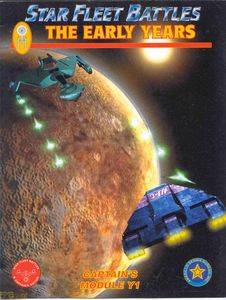 Part of the Star Fleet Battles Captain's Edition line. From the back of the cover: The Wars that Shaped a Galaxy... come alive in Early Years, when alliances (and even Star Fleet) were yet to form. - Complete history of the Early Years, with maps showing changing borders. - The Early Starships: More than 50 Early Years cruisers, tugs, destroyers, dreadnoughts, and frigates; the first ships built from scratch to use warp power. - The Early Bases: 20 SSDs showing the outposts that established ten empires and the stardocks that build the first starships. - Warp-converted Ironclads: 20 ships that made the conversion from sub-light engines and lasers to warp power and phasers. - The Federation National Fleets: Rigellian, Andorian, Alpha-Centauran, Vulcan, and even Orion ships of the National Guards! - Two new races: The Paravians (warrior birds descended from Gorns) and the Carnivons (vicious canines at war with the Kzintis and Lyrans) are introduced. - Five new scenarios display the wars that began all wars.