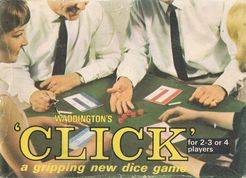 Described on the box as ‘a gripping new dice game’ this is Waddington’s take on Yahtzee. The object of the game is to secure the highest score with eleven turns of rolling five dice. Players first try for six combinations (straight, full, high, etc.). If they fail to score a combination they will add up the matching numbers and enter the most advantageous of them in the left hand numbers column on one of the scorecards. Players may re-roll the dice three times on their turn. On each throw the dice needed are put aside. Combinations are only scored once each. If you fail to get a combination but have already filled in the number boxes then a zero must be entered in one of the score boxes. The ‘Click’ of the title is a combination of all five numbers the same.