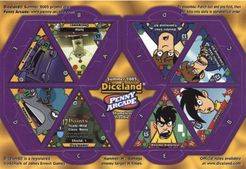 Single die Diceland expansion released as a Summer 2005 promo. Features Penny Arcade characters. All Diceland sets are 25 dice. Ogre was 17 dice, but Space used the rest of the sheet with 8 dice. Cyburg and Dragons were both 12 dice, leaving Cheapass with one space left. So they slapped some Penny Arcade graphics on it (yes, from the webcomic) and you have a special die. Interestingly, though, it's not just another die. It introduces a few new concepts. One is Hammer, which hits a target die multiple times. Another interesting aspect is that it's actually two dice! You see, in Diceland, most dice get damaged one side at a time, from side 8 to side 1. The Penny Arcade die, however, has two side 4s, side 3s, 2, and 1 - essentially, it's like two 4-sided Diceland dice stuck together. There are also ways to shift from one 'track' to another, changing the abilities of the die. Interesting. List of Diceland sets and armies