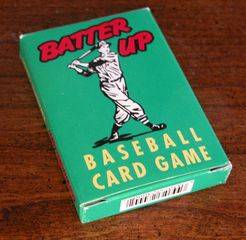 Batter Up is a Baseball card game (using the rules of baseball) consisting of 36 cards and a fold out paper "field" depicting the Baseball diamond. The cards are: BALL (x11) FLY OUT (x2) STRIKE (x10) FOUL BALL (x2) STOLEN BASE (x1) OUT (x3) SINGLE (x3) DOUBLE (x2) TRIPLE (x1) HOME RUN (x1) The first player at bat shuffles the cards, turning over 1 card at a time, until he gets a hit or an out. If he gets a hit, he places the card on the indicated base. The play is carried on as in an actual baseball game. When 3 outs are made, the playing side is retired. The opposing team comes to bat and the cards are reshuffled. Special rules can be made. For example, it is optional to advance all base runners one extra base on a single and a double. This game may also be played as a party game where players take positions on bases. A record of the balls, strikes and outs may be kept by a member of the opposing team calling out each card as it is turned over.