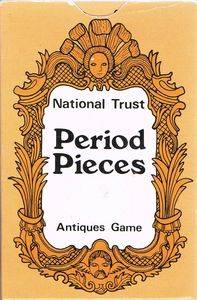 This card game was published for the (British) National Trust by Dinosaur Publications. The game comprises a set of 48 cards, 44 of which depict different furnishings from the Jacobean, Georgian, Victorian and Modern periods. The other 4 are 'House' cards, and they are used as Jokers which can be substituted for any other card. The object of the game is to collect two sets of 3 or 4 object cards of the same period (e.g. Jacobean) or 3 or 4 object cards of the same type (e.g. lighting). The sets are: 1. Kettles 2. Tables 3. Clocks 4. Chairs 5. Toys 6. Cradles 7. Cabinets 8. Lighting 9. Musical Instruments 10. Irons 11. Vessels PLAY Seven cards are dealt to each player, the rest are turned face down to form the draw pile, with the top card being turned face up to start the discard pile. Each player in turn draws the top card from either the draw pile or the discard pile. He then discards a card. As a player collects a set of 3 cards he may, if he wishes, place them face upwards on the table in front of him and score their total. Any player having the fourth card to the set may, in turn, place it in front of himself and score its number. The game ends when one player has disposed of all the cards in his hand. SCORING Cards score according to the numbers on them. House cards score 20. All cards still in the hand of a player score against him, and all cards on the table score for the player who has collected them. The first player to score 200 points is the winner.