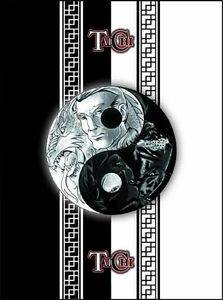 | (Looking for a publisher)

In Tai Chi, each player has a Yin and a Yang token, which they attempt to guide to meet at the center of their score track by playing numeric cards that move the token one direction or the other. Cards are played face down, and three from your hand of five are be played to move either of your own two tokens or your opponent's before revealing and resolving scores. If a token lands at the center point, it may only be dislodged by a pair of identical cards being played on it. Did your opponent just place a card on your track to move you away, or did he play a zero to bluff you into counteraction?