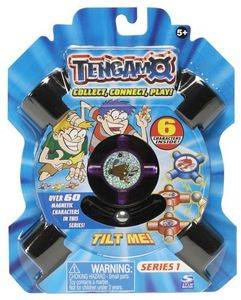 Tengamo offers four different games that can be played in this collectible magnet game. Game packs come with 6 random characters magnets (of 60 current) and a steel marble. In "Roller Ball", each player tosses the same number of pieces onto the playing surface. Players then take turns rolling their steel balls to collect opponents until all pieces have been captured. Pieces have different point values, and the player with the most points wins. In "Magnetic Pull", one game piece is placed in the center of the playing surface, and each player uses the magnetic properties of another Tengamo piece to try to drag the center piece to their side of the table. Pieces are placed in the game by both players until all have been used and collected. The one who has attracted the most pieces to their side wins. "Stack and Build" allows players to create different shapes and images with pieces. "Fridge Throw" can be played one of two ways. Players can throw Tengamo pieces on metal objects, such as the refrigerator, and try to connect without touching their opponents' pieces, or they can throw their pieces at the object and try to hit their opponents' pieces.