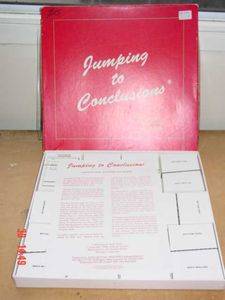 Object of the game: Place the cards face down and the counters in the center of the players. It is useful to play the game in sessions, by breaking the pack into two or three roughly equal parts. Keep the bottom card last. The first player reads the clues on the first card to the other players, starting with the points at the top. The other players may try to answer at any time, without awaiting turns, but each player is allowed only one answer per clue. Where two or more players give the same answer together only the first is counted. Players may pass instead of answering that clue. a correct answer wins the points indicated for that clue. Players pick up counters for their points. An incorrect answer loses five points. Players take turns round to read the clues. Highest score after the last card is the winner.