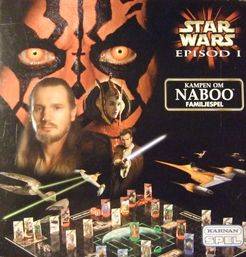 4 armies are fighting to be the first to reach Queen Amidala on the green planet Naboo, to get her to one of their own bases. The armies are 2 different teams: The Good ones and the Evil ones. Each player control one army (or sometimes 2 if you are 2-3 players) and tries to move any of his characters to Naboo, throwing 2 dices per turn, each for one character. When getting doubles, all four characters can be moved. On the way can you attack your opponents and with luck and skill render them harmless. But be careful, so your not attacked and eliminated yourself. Armies from the same side are allies during the game and has to cooperate, ie to open a gate to Naboo, as the planet is protected by a shield. It's done when 2 allies from different armies meet at an alliance field, where 'Star Wars' is stated. Throwing 4 dices and adding attack value, they must get at least 22. Enemies cannot go trough the opened gate. The combat system is simple, by adding attack values and defence values of each character to the dice throws. Regardless who attacked, the player who got smaller number, loses the character. The lost character can be conquered back if ventured in the enemy base and both characters are moved back to own base. When character reaches Queen Amidala, player takes control of it and tries to move it back to allied base. If Queen loses battle, the winning character is moved to center and control of the Queen is changed. The game is based upon the the movie "Star Wars Episode I". The game does probably only exist in Sweden, Norway and Finland. "Kampen om Naboo" = "Fight for Naboo".