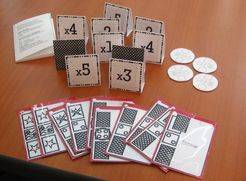 From the publisher's site: E.S.P. is a game for two players, powerful ESPer (person gifted with mental powers). Five dice are rolled and put as a prize. Players put and move multipliers played hidden near these dice, struggling to match on their side their best tiles with the highest rolls, in order to gain victory points. During each round, after the initial placement, you can use five special mental power in order to manipulate dice and multipliers: your goal is both to increase your score and to prevent your opponent in doing the same. Each round may be either very quick or slow because of long reasoning; the ESPer winning three games will be the winner. This game was available in the free web magazine GiocAreA OnLine (former partner of daVinci Editrice) as a promotional tool.