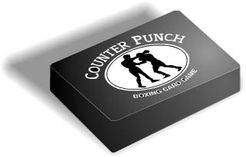 Counter Punch, designed for the real fight fan, is a game that combines the excitement and strategy of boxing. Counter Punch is a game where everyone has an equal chance to win. As in an actual boxing match, this card game requires strategy or you could find yourself on the seat of your pants or, even worse, KO'd! Counter Punch is a 2 player card game. There are 49 cards total, on which appear numbers and punch words. Example: Jab-1, Body-2, Hook-3, Overhand-4, Uppercut-5, Combo-6 and Power Punch-7. The higher the number, the harder the punch. Before each round of play, 12 cards are dealt to each player. The last player to win each trick, throws out the next card first. Whoever played the highest card wins the trick. After the end of each round (each has played their 12 cards), scoring is as follows: 6 to 6 = even round 7 to 5 = Out Pointed Opponent 8 to 4 = Opponent was Hurt 9 to 3 = Knocked Opponent Down 10 to 2 (or better) = Knockout (instant victory) 3 knockdowns in one bout = a Technical Knockout Victory