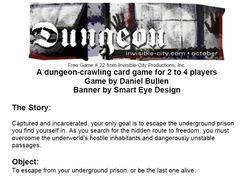 A dungeon-crawling card game for 2 to 4 players Captured and incarcerated, your only goal is to escape the underground prison you find yourself in. As you search for the hidden route to freedom, you must overcome the underworld's hostile inhabitants and dangerously unstable passages. Object: To escape from your underground prison, or be the last one alive. You Need: At least one standard deck of playing cards with Jokers. A single deck will suffice for a 3 player game, but such a game will be extended and bloody! Two decks can be combined for 3 or more players, allowing a quicker and easier multiplayer game. You and your opponent(s) take turns playing cards from your hand, trying to escape the dungeon while making it hard for the other players to escape. There are three basic card types in Dungeon: 1. Passages (the value cards, 2 through 10) represent the tunnels, passages, and rooms you must navigate to escape. 2. Creatures (the picture cards, Jack, Queen &amp; King) represent creatures of the underworld. 3. Aces represent your finely honed adventuring skills. If you escape the Dungeon or all of your opponents are dead, then you win! Download the rules here: http://www.invisible-city.com/play/392/dungeon-update