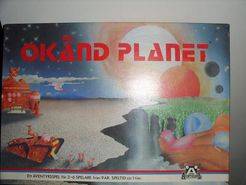 The year is 2384. The Thornus planet is being surveyed by space explorers from Earth. The experts sent out has built six home bases to explore the planet and its resources. By mistake one expedition takes with it the complete set of ignition keys to the space rockets on the planet. Without these keys the rockets cannot be started and thus it is not possible to leave the planet. The expedition is closely monitored by all bases, but what must not happen still happens - the expedition vanishes without a trace! As a player you must form a rescue team and be the one to find the missing keys. (Translated from the Swedish rules text) Each player puts together a rescue team that braves the dangerous planet surface in order to move to the six scattered key sites of a lost expedition carrying the keys to all the rockets used to leave the planet. When you have found one of the three pairs of matching keys, return to any home base and point out the two identical key counters to win the game. For your expedition you may choose 4 different members. You can choose between a captain, a doctor (who may heal wounded members), a technician (who may repair the terrain car), a zoologist, a geologist, and up to three soldiers (who collect food). Bringing along a varied team increases the chance your expedition contains a member with a chance of overcoming/avoiding the various hazards (terrains and events) you encounter on the planet. Each turn you may you do one of the following: - Move - Hunt for provisions (only if there's at least one living soldier in your expedition) - Repair the car (only if you brought along a technician and he/she is still alive) - Perform surgery on a wounded expedition member (only if you brought along a doctor and he/she is still alive) If you choose to move (drive the car), draw an event card. If you move into difficult terrain, stop, and draw a terrain card. Each turn, roll a die. If you roll 1-3, one piece of Provisions have been used up. Terrain and event cards generally contain hazards that are bad for you: your car takes damage, a member of your expedition becomes wounded, you lose one turn, etc. Most cards specify one or two types of crew that is given a chance of negating the effects, should your expedition contain it. Event cards can also mean you found scattered objects from the missing expedition. Collect enough and you are given a chance to look at and memorize one of the six key counters regardless of where your expedition is. The game only exists in Swedish. Okänd planet = Unknown planet. Publishing year was 1984.