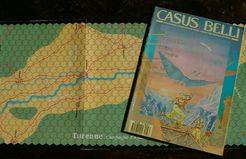 Low complexity operational simulation, set in the reign of the Sun King (Louis XIV), of Marshal Turenne's defense of Alsace against a German coalition in 1674-75. 3 pages of simple rules simulate combat and siege, with geographical and political objectives. The system bears a passing resemblance to SPI's Frederick the Great. Played on an elongated map 29x82cm showing the Rhineland from Mannheim in the north to near Basle in the south. Includes 88 generic counters which need to be mounted. Appeared as an insert in the French magazine Casus Belli (Issue 37 - Apr 1987).