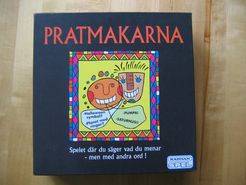 Explain the words on the word cards with synonyms, opposites, associations and other clues and make the team guess as many words as possibly before the time has finished. You get a die throw for each completely guessed card (=4 words) for "Guessing within the team" variant (only the team in turn may guess). The die throws are used to get around the game board and over the finish line. If it's "Everyone guesses" (all guesses on the same card), then you take several cards and you guess for example the 3rd word (decided by a die) on each card. Number of won cards = number of steps on the game board. For "Duel" (the teams guesses on different cards and should be ready first) one of the team guesses all words on a card and the hourglass is then immediately turned and the other team tries to guess the words on their card in lesser time. It has some similarities with the game "Taboo". It's published in Sweden (Pratmakarna = Chatterbox).