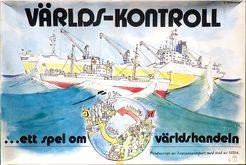 Världskontroll is a Monopoly-stylish educational game published by the swedish fair trade association Tanzania Import. "Världskontroll is a game about industrialized countries, underdeveloped countries, the so-called nic-countries and the multinational corporations. It deals with their roles in the economic order of the world." (translated from Swedish) Players assume the position of either a poor, semi-poor or a rich country, or even that of a multinational corporation. The game has three different phases: in the first phase the game "simulates" the current economic world order. In the second phase some rules are changed in favor of the poor countries. In the third phase the players are to make rules that are fair to all players. There is also an earlier version of the game called Världs-Monopol, with the only difference being the name. According to the manual, the game has been published in Swedish, Danish, Norwegian and English. Even Finnish rules can be found.