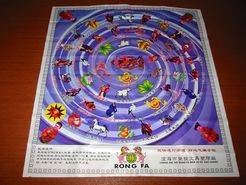 The name of this traditional roll-and-move race game possibly derives from the hulu (Mandarin) or hor lor (Hokkien dialect), which means a gourd, that often appears as a symbol on the board. In the catalogue for the exhibition, Asian Games: The Art of Contest, the following names for this game are mentioned: hulu pan (gourd board) - southern Fujian and eastern Guangdong area hulu qi (gourd chess) in Hong Kong hulu wen (gourd puzzle)in Suzhou fenghuang qi (male and female phoenix chess)in places such as Tianjin, Weixian (Shandong Province), and Chengdu (Sichuan Province). I know it, in Singapore, as Hor Lor Boon. This game is played on a board showing a spiral track and the object is to move one's piece from the outside into the center of the track first(q.v. Game of Goose and Sheng Guan Tu). The track is made up of individual symbols which will be repeated once on the board. Players roll two dice and move the number of symbols along the track. Wherever they land, they will then jump to the corresponding symbol elsewhere on the board (which could be a help or a hindrance). It's not necessary to land exactly on the center square to win - passing it also wins. The symbols may vary, but are usually traditional or mythological Chinese figures (e.g. the Eight Immortals, creatures from the Chinese zodiac) and would include a gourd (hor lor). A contemporary set made in China called cai shen you xi qi (God of fortune game) has two pieces for each player - presumably the roll can only apply to one of the pieces in this version (the rules are not clear on this). The rules for this version state that if a piece is supposed to land on a space occupied by another piece, it remains where it is and the piece it would have landed on is sent back to the start. The board features the God of Fortune as the central space that all the players are trying to reach.