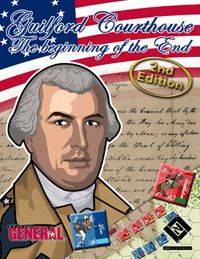 想玩 拥有
The Battle of Guilford Courthouse: The Beginning of the End

THIS GAME HAS BEEN DISCONTINUED. The Battle of Guilford Courthouse: The Beginning of the End, simulates the meeting between the forces of General Nathan Greene and Lord Earl Cornwallis. The player controls by moving counters across the map and combating enemy formations the American and British formations that fought in the battle. The maps, counters, and cards must be downloaded, printed, and cut out before play. The maps must be trimmed to fit each other. The map covers from just west of Hoskins’ Farm, where the British deployed into battle formation, to west of Guilford Courthouse. The counters represent companies (50-100 men) and artillery batteries (2-3 guns). Each turn represents 10-15 minutes.